Practical lessons from past drawdown experiences

There is an old Chinese adage that says “that which does not destroy me will only make me stronger”. It refers to the internal battle with one’s self. As we know, trading certainly can be an internal battle but this quote could not be more relevant than when discussing a trader’s psychological mindset and their inner ability to handle portfolio drawdown.

I hope this educational journal entry will challenge the way you approach trading and investing.

Drawdown occurs when a trading strategy becomes misaligned to the current market conditions or when a trader’s psychological mistakes manifest themselves to create drawdown in a portfolio. The direct results of either of these occurrences are that money is given back to the market and that the portfolio moves into a state of drawdown.

While drawdown is a natural part of trading and investing, what does differ is how much drawdown each investor can mentally handle. As humans, we all ‘see’ the world differently. What appears as something normal to one person can appear completely disastrous to another. While a 10% portfolio drawdown could be extreme for one investor, the next investor may be able to trade through periods of 50% plus drawdown.

I remember reading a story of the famed trader Larry Williams and how in the 1980’s he won the world’s most prestigious trading competition by growing $10,000 to $1.1M in 12 months. I’m sure many of you reading this say “WOW” and rightly so, but what if I was to tell you that during this trading period Larry Williams had a period of 85% drawdown in his portfolio. At one stage, Larry had grown the $10,000 to well over 2M before he gave half of it back to the market.

Reading this, many investors may think, “I can handle drawdown”, but honestly you have no idea how much drawdown you can handle until you have been stuck in the eye of a number of your own personal drawdown storms.

Percentage drawdown amounts will also vary according to the markets you trade and the level of leverage you use. Those trading futures, FX and other highly leveraged instruments have the potential to achieve high levels of return on their capital. In return for this they must be able to accept higher levels of risk and as a consequence, higher levels of drawdown. More reward – more risk. More risk – more drawdown.

How can you be better prepared for the next time your portfolio heads into drawdown?

To make this journal posting as practical as possible, I have used two of the larger periods of drawdown experienced by the SPA3 long only public portfolio.

Important details you need to know about the portfolio

The benefit of using the SPA3 public portfolio for our examples is the tremendous amount of data and varying market cycles the portfolio has been actively traded through.

The portfolio has been traded mechanically, continuously and strictly to the rules of the SPA3 methodology using SPA3 risk profile 2 (portfolios trading risk profile 2 engage the market under all market conditions albeit with smaller position sizes in a SPA3 high risk market – more information on risk profile 2 can be read here.

Practical examples that you can learn from

The 9-11 World Trade Center tragedy in New York was an unprecedented time for traders and investors. During the course of a couple of weeks the market would fall 14.8% and the SPA3 portfolio would follow suit and fall over 10%.

I clearly remember the shock and horror from the event and the uncertainty that was felt by the market and a great majority of investors. It was a time of nervousness, instability and apprehension as it always is when we are living through such an experience but in such times, a cool head and objectivity is required.

Many doomsday investors stopped investing around this time because the emotional pain was too great. This meant that their portfolio would stay in drawdown, at that level forever, if not started up again.

The mechanical nature of SPA3 had the portfolio trading right through this period albeit with the appropriate risk management and reduced position sizes (SPA3 signalled a high risk market on the 5th September 2001). While I remember it being an extremely difficult trading period at the time, it was only 4 months until the portfolio would come out of drawdown and make a new equity high.

Ask yourself how you would react to the situation with this type of drawdown? (Displayed in the chart below – A) 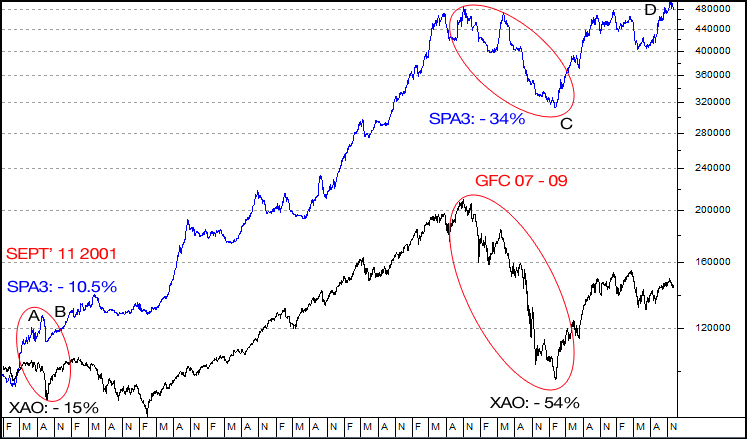 The 2007-2009 Global Financial Crises was primarily driven by a credit liquidity shortfall driven from the collapse in the US housing bubble and the sudden tightening of the credit market.

This was an extremely challenging period for many investors and financial money managers as many found themselves without the appropriate risk management rules to protect capital.

From November 2007 to March 2009 the market would fall 54.1% from its high while the SPA3 long only portfolio which too traded continuously through the same period would fall 34% from its equity high.

Ask yourself how would you react to the Global Financial Crises drawdown? (Displayed in the chart above – C)

The portfolio reaches a new all time equity high which the All Ordinaries (AXO) is still 30% below it’s November 2007 high. (Displayed in the chart – D)

The first question to ask yourself at this point is how did you handle the drawdown during the GFC? If you were a SPA3 client trading risk profile 2, were you able to weather the 34% drawdown and keep on keeping on, or even worse, without the use of a system with a proven edge and money management rules did you suffer a much larger drawdown in line with the -54% experienced by the index?

You see, drawdowns are a natural part of trading and investing in the markets. They will continue to occur as long as humans with the emotions of fear and greed continue to put their capital at risk in the markets in order to generate profits. And as humans we have a natural tendency to magnify any situation when we are caught in the heat of the moment. Watch a child when they fall off a bike and hurt themselves. Their initial reaction to the blood is to cry and scream and assume the worst. Then when they calm down and see that it is only a minor scrape, they get over it, move on, and are usually straight back on the bike again! Drawdowns and crises in the market tend to be the same.

The second and more important question to ask yourself is where is your portfolio placed now in relation to the drawdown experienced? Did you keep on keeping on? How much of the Global Financial Crises drawdown have you regained? SPA3 has regained it all!

Over almost the past 10 years, the SPA3 public portfolio has traded through cycles of drawdown and new portfolio highs. From a $100,000 capital injection in January 2001, the portfolio has grown to $482,752 including brokerage as at the 1st December 2010. This compared to investing $100,000 in what I refer to as the private investor benchmark, the All Ordinaries Accumulation index, over the same period which would be worth $213,490. In percentage terms the portfolio has returned 17.32% compounded per annum compared to the Accumulation index which has returned 8% compounded per annum.

This performance supports SPA3 initial research findings in 1998 and demonstrates the strength of SPA3’s statical EDGE.

I challenge you to consider how much drawdown you think you can handle within your portfolio. You should then make changes to your trading plan and strategy so that they align with your personal make-up.

If you decide to stop trading because you have reached your limit, you need to decide how and at what point you will re-engage the market in the future. I’ve spoken to too many investors over the years that have formed a biased opinion about the market to find themselves sitting on the sidelines when the market turns up and continues to rise.