The retracement was overdue and hence welcomed. However, the USA equities indices may not have had a sufficient breather and this is a concern. On the other hand it can also show strength. But at some stage the USA indices must retrace and take a rest.

From analysis of current data it certainly looks like equity markets are going to soldier on higher. Many market commentators are predicting equity markets to fall from these levels, some even using terms like “blood on the streets!!” and others predicting high probabilities of the mid 3000’s being visited again on the All Ordinaries.

Now I am NOT saying that it is a dead cert that will this NOT happen (sorry about the double negative) but on current data this is nothing more than speculation and prediction probably based on subjective motivations that may not even have anything to do with the markets.

Until there is price data evidence to the contrary the objective analysis can only be that the longer term trends are all still in tact and we have to go with that until they are not in tact.

Newer readers of this blog should read this analysis in context with a previous big picture posting on the Gary Stone Journal from 28th Februry this year: “History Making Event on the Horizon”.  From this you will glean that the USA equity indices are at historically important levels and that USA equity markets continuing higher will be quite a big thing.

Most commodities are in long term down trends or tracking sideways in wide ranging channels. The Continuous Commodities Index and the CRB Index continue to head lower having made lower lows and lower highs since September 2012.

Gold has bounced off a very strong support zone between 1520 and 1550. A fall below this zone that remains below it for more than two weeks could see gold fall to the next support zone between 1420 and 1450. This would really scare a lot of the Gold bugs and test gold stocks which have been in the doldrums for some time even though they don’t necessarily move in unison with the Gold price. Having said this, expect the Gold price to hold its support at these levels and head higher in the short term.

Copper has also bounced off its support zone of 330 – 335 which it needs to remain above to avoid a trip down to its next support level around the 300 level. If support does not hold, this would not augur well for small to mid cap resource stocks in Australia, South Africa and Canada which have performed so poorly anyway relative to the rest of the market since September 2011.

The S&P500 is a smidgeon away from an all time high (1576 – the upper blue horizontal line in the chart below)  having achieved its highest ever close (1570) last week. Of course the DJIA is in unchartered territory achieving a new all time highest high and highest close (again!) in last night’s trading session.

The S&P500 has already retreated once from breaking into its unchartered territory. How many more attempts will be made? Just one, or another two? If we get to it and the fourth attempt fails, take that as a high probability that we might suffer a more significant retracement down to around the 1485 or 1460 levels.

If a break out to new all time highs occurs then expect a testing of the current all time high by a retracement back there – it will have to hold at that support level for the markets to then continue higher. If this occurs then an initial upward projection on the S&P500 is around the 1692 zone. 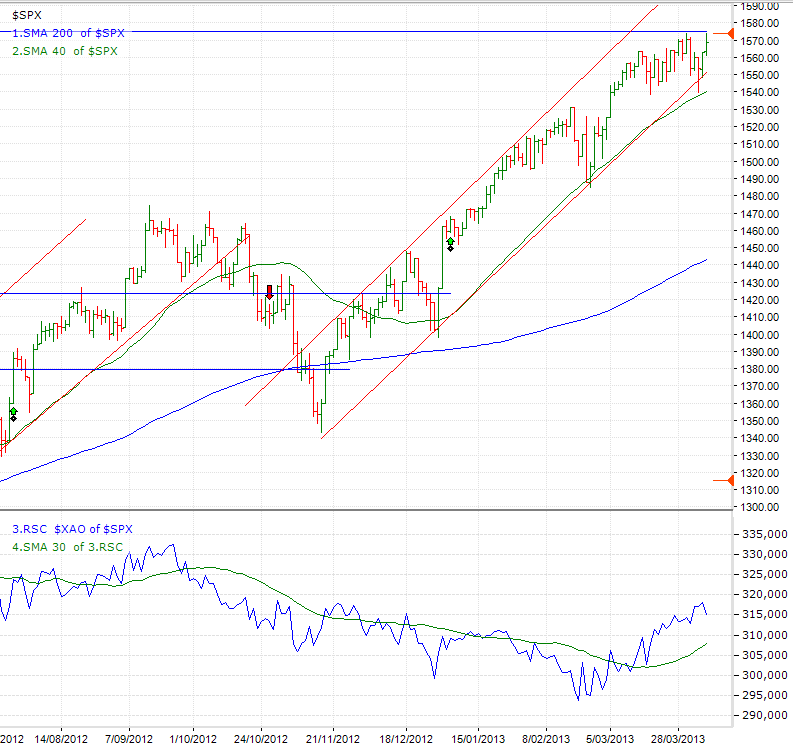 Australian Market and All Ordinaries Chart

The continual underperforming sector in Australia for the past 2 years has been the Materials sector and it continues to disappoint being the only sector in a long term down trend. Some may take this statement the wrong way in that economically this sector has been Australia’s saving grace over the last few years. However, economic cycles and stockmarket cycles are seldom in sync and thus  returns for investors from this sector have been poor for more than 2 years now.

In direct contrast, given continuing weak business & consumer confidence and a weak retail environment that has existed for the last 2 years, the Consumer Discretionary sector has been the strongest over the last 3 – 4 months, as is shown in the table above. Again, economic and stockmarket conditions are seldom in sync as markets forerun economic conditions.

In the All Ordinaries (XAO) chart below the Australian market enjoyed a brilliant run-up until mid March. Referring to the 3rd graph below, entitled ‘RSC $SPX of $XAO’, it is obvious that the XAO was outperforming the S&P500 but since late February the XAO has reverted into ‘underperform mode’ with a far sharper pullback that the USA equity markets since mid March.

In the immediate future the main analysis to focus on is the upper horizontal channel line at 5050. The XAO broke above this line only to fall back into the range (between the two red horizontal trend lines) again. The 5050 zone has once again become an important resistance line. For this market to continue higher it is important that the XAO approaches this zone and does not find resistance at this line. Thereafter it needs to make another new high above 5175 in the next two or three upward thrusts to continue higher.

However, the recent retracement since mid March has been text book for a strong trend halting just above the 38.2% Finonacci retracement level. Given this set of circumstances and failing any left-field news from outside the financial markets, I would expect the XAO and  other equities markets to make new highs again with the upside target zone being 5405 – 5425, until we get evidence to the contrary. 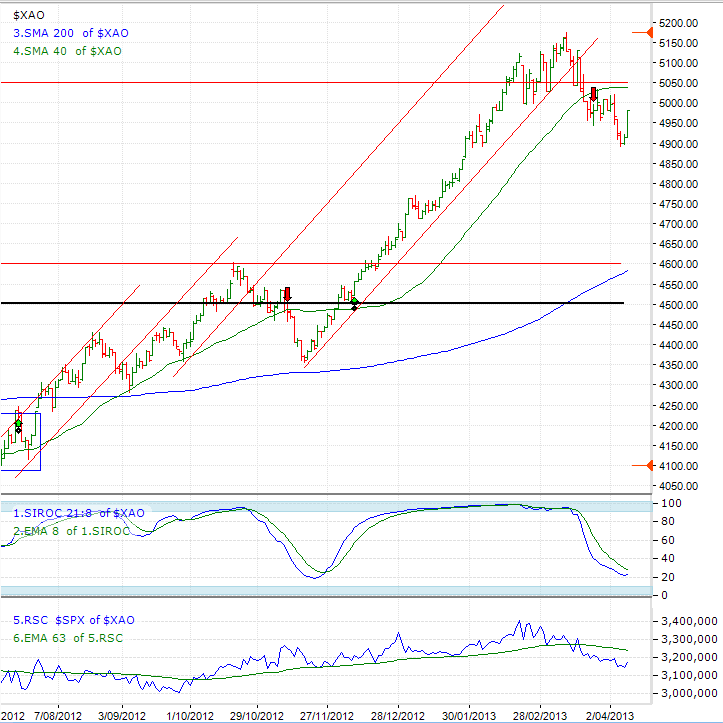 Portfolio Summaries
The SPA3 public portfolios continue to outperform the market over the long term by a large margin. See the performance table below that shows the comparative compounded annual returns.