The close on All Ordinaries and ASX200 on Friday last week, 11th December, took both of the ASX’s main benchmark indices to the bottom half of a significant support zone. On the All Ords between 5030 and 5175, and on the ASX200 between 4950 and 5050.

The two and a half year daily chart of the All Ords below shows this key support zone and the current All Ords ‘price’ resting near the floor of the zone. It’s a significant support zone for a number or technical reasons: 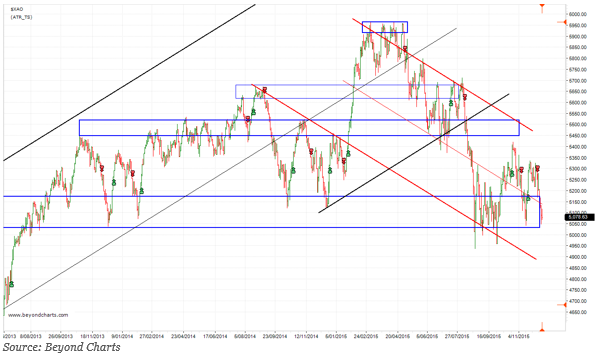 Following Friday’s lead on Wall Street this significant support zone is going to get a really good test.

How can this play out?

Secondly, the All Ords could fall further and find support at the lower red trend line of the down trending channel. This would be around 4870 on the All Ords and around 4780 on the ASX200.

On the other hand, if support holds despite Wall Street’s weak lead from last week, this would re-inforce the significance of this key support area. The odds of this being yet another low for an upward thrust would increase greatly.

Keep an eye on the scenarios just discussed as this coming week plays out with an announcement on interest rates in the United States and the continuing negative news on all commodities, not just oil. Will the support zone be tested and found wanting? Or will it withstand the onslaught of downward pressure over the next few trading sessions?