For decades BHP has been the “big Australian” being the country’s largest market capitalised stock. But every now and then it gets knocked off its perch as it has been in the past by Telstra and currently by CBA.  BHP is currently capitalised at A$121.4 billion on the ASX compared to CBA clocking in at A$130.7 billion.

The weekly chart below shows that the BHP share price has been stuck in a range between $30 and $40 for the last three years since August 2011. 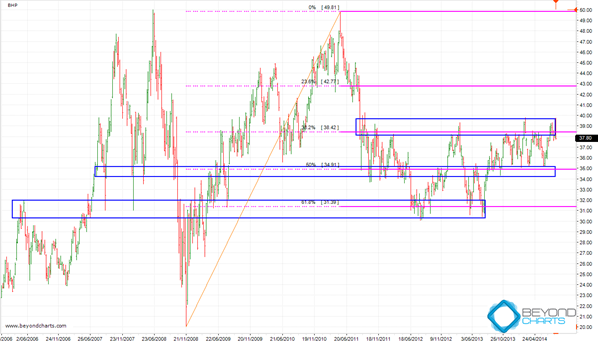 Technically, for BHP’s share price to rise to previous levels of around $50 and maybe beyond, it needs to have a clear break above $40 as a first step. It is obvious from the above chart that numerous attempts have been made in the last eighteen months, in vain.

In the short term the odds are that BHP will retrace back to the middle support zone and Fibonacci 50% retracement area of around the $35 mark.

So what may it take for BHP to break out above $40?

Firstly, recent announcements of a demerger to create a separate global metals and mining company may be a catalyst to energise such a breakout. It could however also have the opposite effect depending on how investors digest what the demerger will actually mean.

Secondly, a rally in metals prices may be the impetus required to fuel a BHP breakout above $40. In the chart below the Continuous Commodities Index and the S&PGS Commodities Index have both been overlaid on the BHP weekly chart with a common relative base as at January 2007.

These two commodities indices are calculated slightly differently hence their different magnitude in price movement however their shape and direction over the last 7.5 years are very similar. The key conclusion from this chart is the high correlation that the BHP share price has to these two commodity indices. 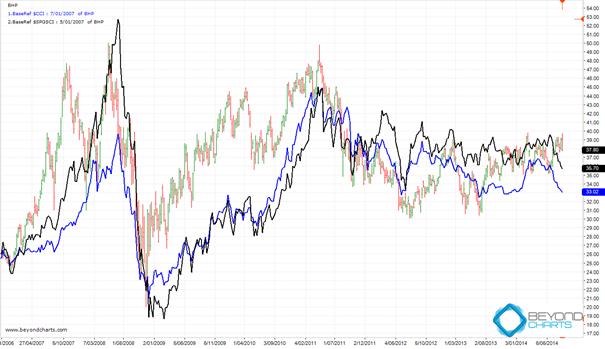 The question begs whether the BHP price will be able to rally without a rally in these commodity indices which will need metals and or oil prices to start rising, the odds of which appear low in current global economic conditions.

Also, how might the market view the demerger entity compared to the remaining BHP entity in the light of this high correlation to the commodity indices?

Another factor in this correlation is that iron ore is not included in either of these commodity indices. As iron ore will remain in the core BHP Billiton entity maybe the decoupling of BHP Billiton from its ‘metals and mining’ assets can have the necessary effect for a rise in the BHP Billiton share price. But what then of the demerged entity which will most likely continue to have a high correlation to the commodities indices?

In the short term, with the uncertainty of the demerger and the high correlation to commodities prices, it appears that there is a low probability of the combined BHP Billiton share price reclaiming the number one seeding. Unless of course CBA’s fortunes change for the negative but there seems to be a low probability of that occurring too.