CSL – time to lighten, or even sell

CSL Limited (ASX:CSL) is a $31.7 billion market capitalised company and is an ASX20 Index constituent. In fact, it is the 10th largest listed company in Australia by market cap and is the country’s largest listed Health stock and therefore would be a key holding in many managed funds and SMSF’s.

From September 2011 to March 2014 CSL’s stock price performance was stellar, rising 176%. And then there were dividends too.

However there are some strong technical signs that CSL’s share price might be in for some noteworthy underperformance compared to the wider market and there may just be a price retracement of some significance. I can hear my decriers as I write this but I urge you to take heed of the signs highlighted below.

The first chart below, a 14 year weekly chart, shows CSL’s fall in the 2002/2003 bear market, its subsequent rise in the 2003 to 2007 bull market in Australia, the fall and consolidation during the 2008 bear market and, lastly, its brilliant price performance from September 2011.

There are four technical points to make over this period to set up the technical case for potential price weakness over the next few months: 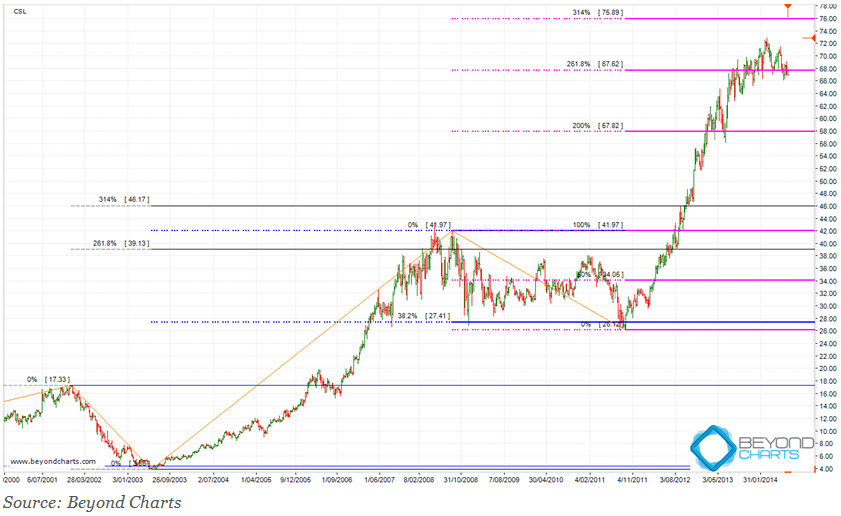 In the bottom half of the chart, a graph is shown of the Relative Strength Comparison (RSC) compared to the All Ordinaries Index. The RSC is simply calculated by dividing CSL’s share price by the All Ordinaries and shows relative price performance.

At the hard right end edge of the chart below the blue RSC line has turned down and has crossed below the red 30 week moving average line. This is a key technical sign that is clearly showing CSL’s relative price weakness compared to the wider market. 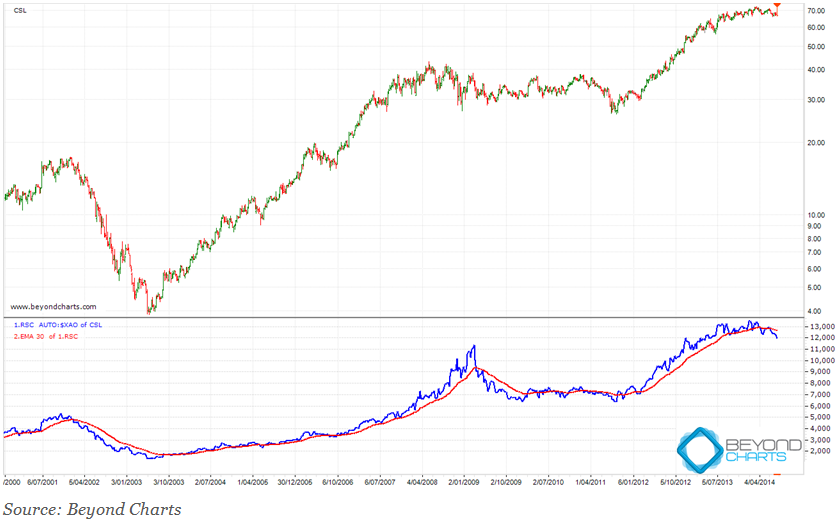 However, the most important technical sign of impending price weakness is the ‘head and shoulders’ pattern, a bearish pattern, which is shown in the daily chart below. This pattern has formed over the first half of 2014. 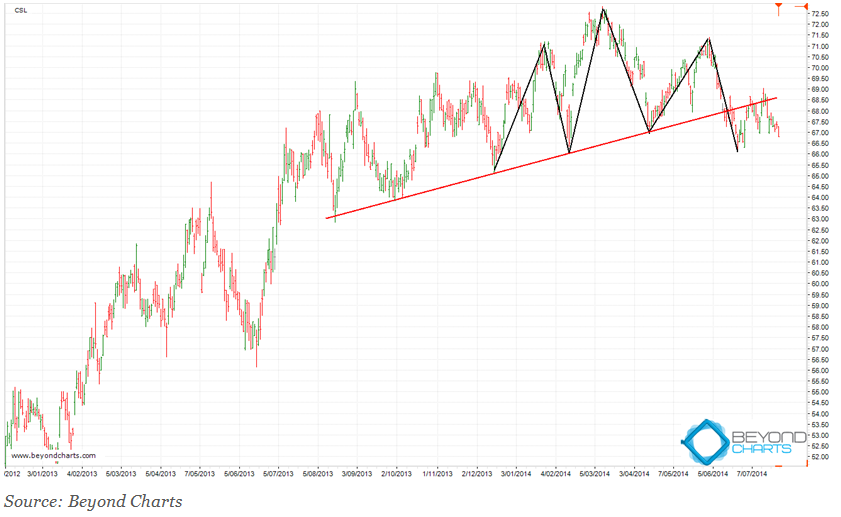 Nice name for a pattern but what does it mean? Technically, the right ‘shoulder’ is a lower peak than the ‘head’ meaning that price has not been able to make a new high, the first sign of weakness. The ‘neckline’ is a support line that is drawn at the two troughs at either side of the ‘head’. The above ‘neckline’ is as good a ‘neckline’ as one might see on a ‘head and shoulders’ pattern.

The ‘neckline’ is key in the pattern as it:

CSL’s price action has followed the technical analysis ‘head and shoulders’ bearish pattern to the book having tested the ‘neckline’ twice by attempting to rise above the ‘neckline’ after falling below it, and failing both times.

All these technical signs combine to signal a high probability that CSL’s price might undergo a period of weakness.

From here the odds are that CSL’s price will make a new low below $66.16 and move lower or consolidate in a wide ranging sideways movement for some weeks or even months.

Of course, if support holds at any of these levels and CSL moves higher to make a higher high then this would signal an arresting of the share price fall and might indicate a resumption of CSL’s long standing up trend.

CSL has been a near ‘life member’ since the 1990’s of Share Wealth Systems Gold Medal List of fundamentally sound stocks on the ASX of which there are only 13 stocks that currently qualify for the Gold Medal List. So I am fully aware of CSL’s fundamental pedigree.

However, over recent years CSL’s rate of growth in dividends per share (DPS) and earnings per share (EPS) has been declining with compounded growth over the last three years in DPS and EPS being 9.21% and 12.28%, respectively, compared to the seven year DPS and EPS compound growth of 24.53% and 22.42%, respectively. With the much lower EPS growth one should question whether CSL can continue to sustain a trailing PE Ratio of 22.92. Also, Dividend Yield is now down to just 1.73%.

CSL has long been viewed as a growth stock and under such a banner, if it still fits, can sustain a high PE Ratio. But it also carries the tag of being a defensive stock and if the All Ordinaries gathers some steam from current levels the defensive tag may weigh down CSL relative to other stocks.

Investors need to determine their investing horizon and decide whether to act on such technical signals as put forward in this article and rotate into a different stock holding or to sit through any price weakness without taking any action at this time.

Either way, from a technical analysis charting perspective CSL’s current price situation relative to its past share price movements provides text book material from which investors can learn aplenty. Let’s see how this one plays out….