DAX Index ETF and the effects of currency exposure

This week in our ongoing ETF series I want to take a look at the effects cross currency exposure can have on the performance of some ETFs.

When we trade ‘domestic’ stocks on our own stock market (ASX for Australia) using our own currency (Aussie dollars), we are never exposed to currency movements as all our buys, sells, profits and losses occur in Australian dollars. If we choose to invest on any markets other than our own, that are not based in Australian dollars, then we become exposed to movements in the value of our currency against the value of the currency of the market we are trading. For most of us, this will be in the US markets – stocks, ETFs and futures – as these are some of the largest markets in the world.

Now, with this in mind, as an example, let’s take a look at the German DAX ($DAX) index versus the ETF for this same Index, the iShares EWG ETF.

As can be seen in first chart below, the German stock market has had a remarkable run since its low in mid-October last year, surging by over 3500 points, or 41%. 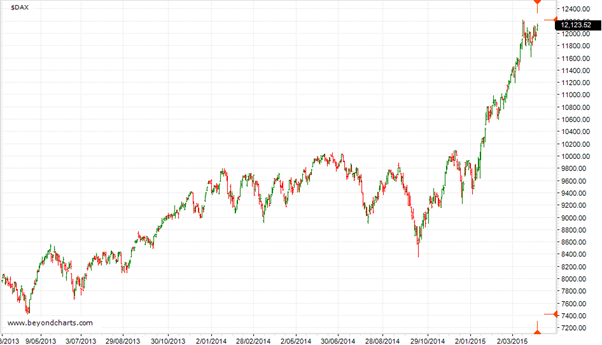 Prior to the advent of ETFs, and unless we had a futures trading account with a futures broker, we would have had little chance of participating in this market. Now however, we can access this market via the ETF of the DAX Index, EWG. The chart of EWG is shown below. 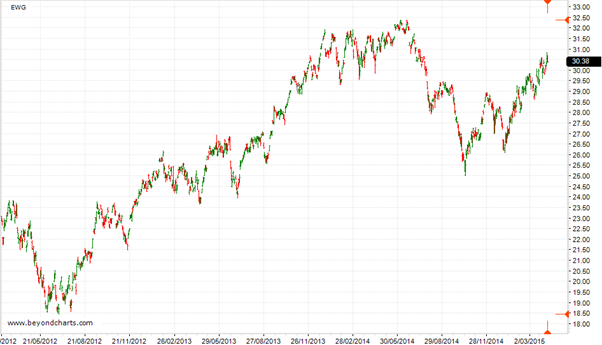 Clearly however, the ETF has had nowhere near the meteoric rise that the DAX Index has experienced over the last 6 months or so. Over the same period the EWG is up just 19%, less than half.

This becomes far more evident if the $DAX is overlayed on the EWG as in the next chart using a base date of 4th June 2012. Note that until August 2014 there was a close correlation between the $DAX and the EWG until mid-October 2014 where the EWG started underperforming the $DAX. 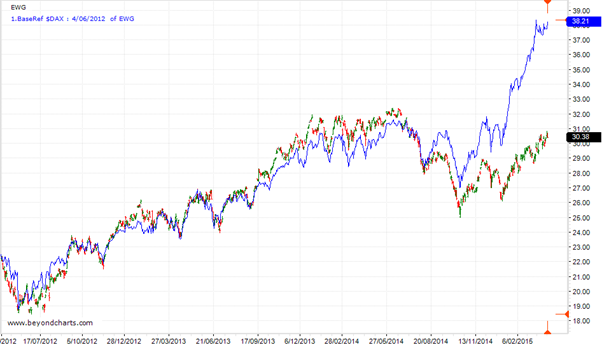 This seeming anomaly has occurred as a result of cross currency exposure! The EWG is listed and trades on US markets and is denominated in US dollars. The DAX Index is denominated in Euro’s. Over the period that the DAX has been strongly rising, the value of the Euro against the US dollar has been declining, as shown below. 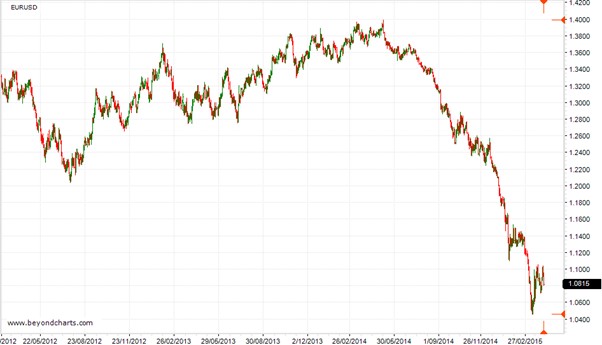 The net result being that although the EWG ETF has risen in value, it has suffered as a result of a declining Euro, and has not performed as well as the DAX Index. Meaning that the EWG ETF has the currency movements ‘built’ into it.

This could of course have been offset by ‘hedging’ the long EWG position by being short EURUSD, but this is a level of complexity that most of us would not undertake.

The idea of this post is just to highlight some of the complexities of the global market place and the many inter-connections that exist when we enter this global investing environment.

This means that an investor in ETFs, whether on the ASX or USA markets, should conduct their analysis on the ETF and not the underlying index which the ETF tracks.

Next week I will be looking at the inverse of this situation, where a declining currency value has actually improved the performance of an Index ETF!