Investing in Gold as a hedge against inflation (part 1)

This week I would like to explore the notion held by many investors, and economic theorists, that investing in gold is the ultimate store of value and a hedge against inflation, and that it is a ‘safe’ investment that will outperform shares over the long term.

The argument put forward by the ‘gold bugs’ is that physical gold in the form of gold bars or gold bullion can be purchased and held in high security vaults providing the owner with a tangible asset with a specific value that they can redeem at any time, at the market price, for cold hard cash. The glow, resistance to erosion and relative scarcity of gold compared to all other metals has been a supposed driver of gold’s value for millennia. The World Gold Council estimates that a total of 170,000 tonnes of gold has been mined since civilization began. At US$1,300 an ounce this is worth approx. US$7.072 trillion. Compare this to copper, for example, with over 18 million tonnes mined annually!

Let’s have a look at the ‘real’ or inflation adjusted gold price to determine if holding gold as a long term investment and an inflation hedge is really as good as it is cracked up to be. Writing in the Societe Generale Popular Delusions newsletter, Dylan Grice, points out that even if the price of gold reached $2,300 per ounce, it would still only match its January 1980 price, in real, inflation adjusted terms.

The peak in gold prices in September 2011, at around $1900 per ounce was still a long way short of the 1980 high in 2013 dollar terms. Anyone holding gold for this 30 year period would have earned absolutely nothing on their “safe” investment.

Grice also points out that the average gold price in 2010, when adjusted for inflation, was the same as the price in 1265! (Note: the price of gold now is around the same price as it was in 2010.) Anyone who had invested in gold in 1265, bequeathed it to their children and had them do the same over the generations would have experienced a 500% decline in their family fortune. 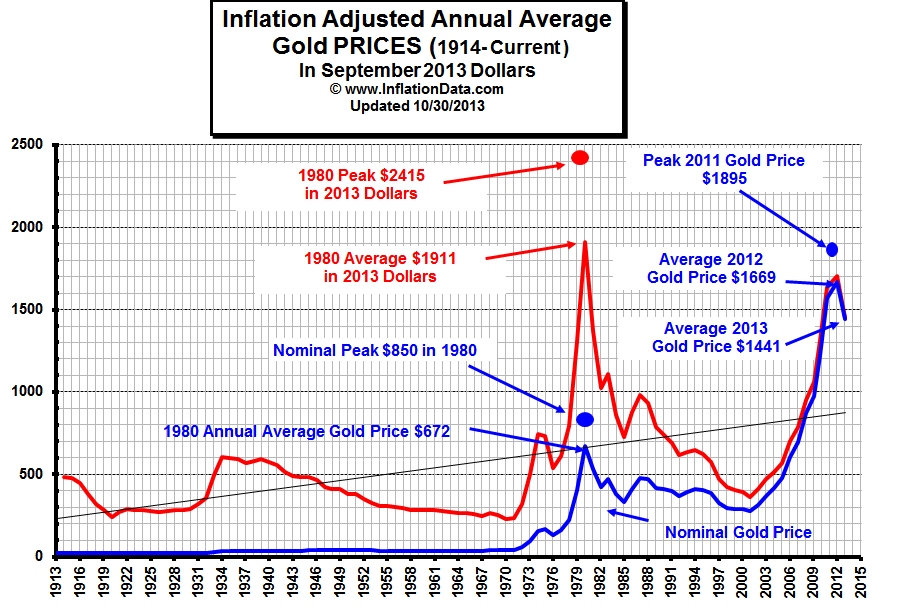 The chart above, with courtesy from www.inflationdata.com, shows the gold price adjusted to 2013 dollars.

The two key drivers of the gold price are really fear and inflation. During periods of geo-political tension, war, and financial and economic instability, the price of gold usually spikes as its safe haven status comes to the fore. This also occurs during periods of high inflation as investors seek safety over declining currency values and other assets. The main point here is that gold is NOT intrinsically safer than any other asset. It goes up and down in value, just like any other asset according to factors affecting supply and demand, and you need a strategy to buy and sell gold, just as with any asset.

Next week I plan to take a closer look at the price of gold compared to the price of stocks. As we discussed, there are many in the investing community who believe that an investment in gold is an ideal hedge against inflation. Hopefully now you understand this is not really so.