Take look at this schematic published by the largest fund manager in the world, Fidelity. 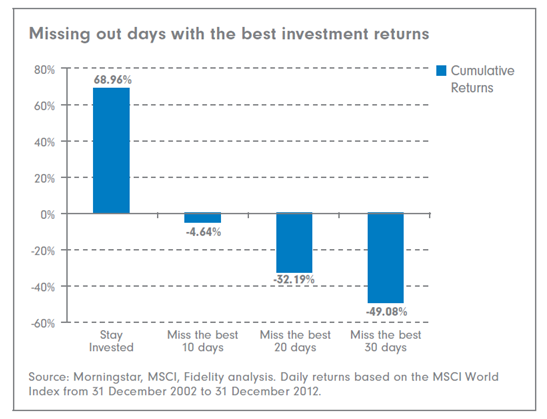 The whole flyer can be found here:

Note that it also had the backing of MorningStar and MSCI, two other names that I’m sure every reader of this blog would recognise.

The message on the flyer is this: if investors miss the best ten days in the stock market over an entire ten year period then their returns will drop from a total 68.9% absolute return to -4.64%. That is, just for missing a miserly ten days ALL the returns will be given back to the market, plus more.  And it gets worse if the best 20, 30 and 40 days are missed. From around 2,500 days.

Therefore, try to time the market at your peril because the probabilities are very high that you will miss the ten best days. Conclusion, invest in a Fidelity managed fund!

Most would take this at face value without spending a nanosecond even questioning or further researching it. Even worse, they would probably propagate the misinformation to friends and family and argue this nonsense to the death if anybody questions them.

Them’s fighting words Stone, you had better be able to back-up these accusations!

I did the same exercise on the All Ordinaries. The outcome was similar to the MSCI World Index, as was the S&P500. 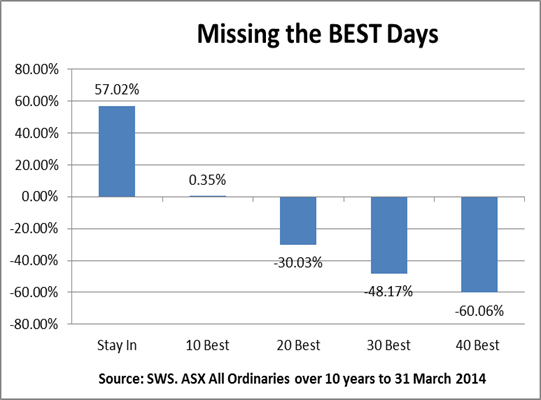 But in this investing caper one must always be objective and maintain a neutral mindset. This includes looking at the flipside of any notion. So I looked at what the outcomes would be if the ten worst days were missed. 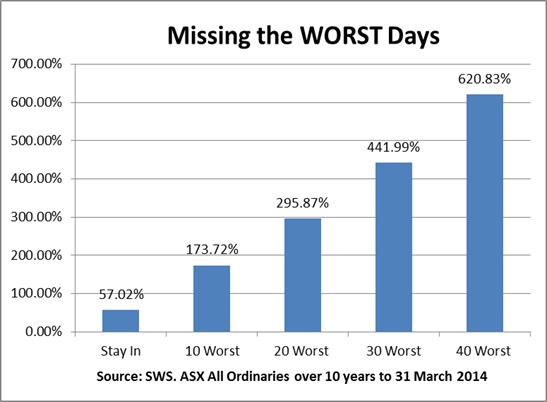 Wow! There’s definitely a case for using timing to miss the worst days. At this stage it looked to me like the case was better for missing the ten worst days than not missing the ten best days. Which the next chart shows with a net better return if both the 10, 20, 30 and 40 best and worst days were missed. 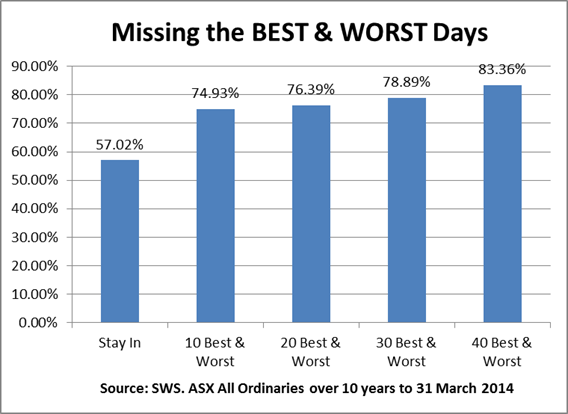 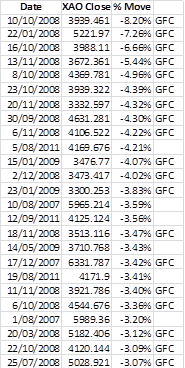 19 of the 25 worst days over the ten year period occurred during the 2008 bear market. 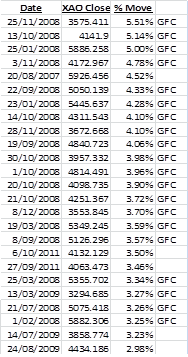 And 20 of the 25 best days over the same ten year period occurred during, you guessed it, the 2008 bear market!

Shock horror! The best and the worst days occur in very close proximity to each other so missing the worst days and being in the market for the best days is nigh on impossible. The research on the S&P500 over the same ten-year  period showed exactly the same outcomes.

This also proves that the most important task for an equities (and ETF) investor in any investing timeframe, short, medium or long term, is NOT to be in for the best days but to miss the worst days in the market.

I wonder why Fidelity, Morningstar and MSCI didn’t tell us that in their flyer.

Is it because they didn’t do the research and didn’t know, in which case this is a good dose of incompetence (wonder if this is the same level of competence that they put into researching their portfolios?)?

Or they did know but decided to misrepresent the actual situation and disseminate misinformation with the express purpose of misleading investors.

I don’t know which is worse but they are definitely guilty of one or the other.

PS: it gets worse. When I went searching for the flyer I found this webpage on which Fidelity has a calculator that shows graphically what missing the best days in the market has on an equity curve.

Of course, they ONLY remove the BEST days and leave the worst days in. As you now know this is misrepresentation of the highest order because they should remove BOTH the best and worst days to represent the data realistically because missing the one without missing the other is pretty much impossible, which they do point out but don’t include in the calculations.