An index that I have been keeping a close eye on for over a year now is the NYSE Composite Index. This index is one of the major indices in the United States but seldom gets quoted on the airwaves. It should. And once one understands why, maybe others will take a bit more notice of it.

For example, BHP Billiton, Rio Tinto and Westpac are listed on the NYSE and would be in the top 100 listed companies on the NYSE by market capitalisation. However, they are excluded from the S&P500 but included in the NYSE Composite, as are many other well-known world companies such as Shell, BP, Toyota, SAP Ag, Vodafone and others.

In the weekly charts below the NYSE Composite is on the left and the S&P500 on the right. Both charts cover the period from late 2006 to current showing the 2008 bear market decline and the ensuing rise since.

The S&P500 on the right broke above its all-time high resistance zone, shown by the horizontal blue rectangle, in April 2013 and has risen steadily by around 26% since this breakout.

That breakout in April last year was a very important breakout from a technical perspective as it marked the move from a secular bear market in US equities, which had been in place for at least 13 years, to a secular bull market where the S&P500 had moved into uncharted territory. The Dow Jones Industrial Average also achieved the same breakout at roughly the same time as the S&P500. However, the NYSE Composite did not. 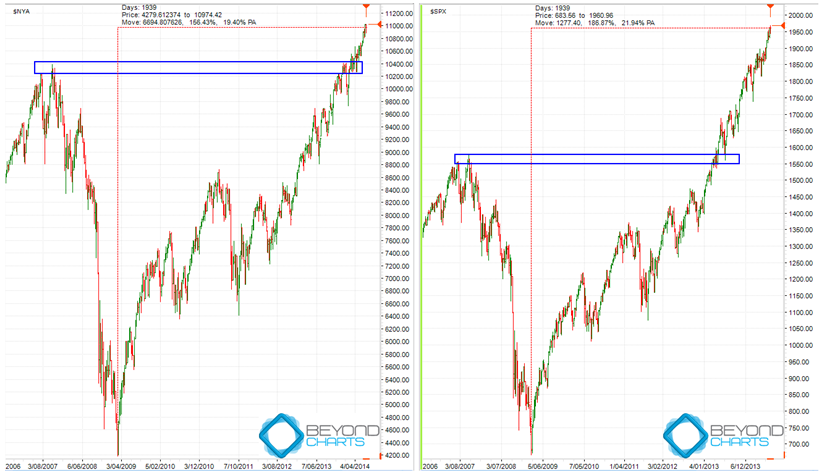 In April this year, almost exactly a year later, the NYSE Composite achieved the same new all-time high breakout making its move into ‘never-been-before’ territory.  This can be seen in the top right corner of the chart on the left. This is the move that I had been waiting for. Or more precisely to see if the NYSE Composite faltered at this point and battled to make a new all-time high. It did not. It broke through with hardly any resistance.

Why is the NYSE Composite breakout important?

The NYSE Composite breakout is yet another confirmation that the secular bull market breakouts that have already occurred in the S&P500, DJIA and DAX (German Index) are significant in nature. It also shows that non-US companies’ share prices listed on the NYSE from around the world are still continuing to rise to new highs.

Since the bottom of the 2008 bear market the S&P500 has risen by 187% and the NYSE Composite by 156%, indicating that US companies’ share prices have risen over this period by more than the non-US companies that are listed on the NYSE. However, since the market top in March 2000, arguably when the secular bear market started, the NYSE Composite has outperformed the S&P500, up by 53% compared to 28% for the S&P500.

Going forward, market followers should continue to compare these two indices and ensure that the NYSE Composite, as does the S&P500 and DJIA, remains in secular bull market territory above the zones shown by the horizontal blue rectangles in the charts above.