My attention was drawn to an article in The Age (also published in other Fairfax newspapers) on 23 April, entitled “Time to let go: selling in May could be a winning strategy” written by ATAA member Alan Clement. The “Sell in May and Go Away” subject comes up around this time of every year with market commentators putting different spins on the old adage, some for and some against, so I thought that I would try and put it to rest once and for all.

Alan’s article looked at historical data on the S&P500 going back to 1998. 13 of the 15 years span a secular bear market. I decided to run some research that went back to 1950 and then back to 1928 which includes multiple secular bull and bear markets to determine whether the “Sell in May and Go Away” strategy had an edge or not and, if so, how good an edge.

The basic rules of the strategy that I researched were to buy in the last week of October or the first week of November, depending on which was the closest Monday to the end of October, and to Sell on the last Friday of April. I chose the last week of October, as opposed to earlier in October, to avoid or minimise the effect of the big falls of 2008, 1987 and 1929 – yes hindsight bias. When buying at the end of October each year, the same amount of capital that was divested in April was re-invested in October later that year.

The theory is that one will avoid the so-called notorious market periods from May to October in the North American and European summers when people supposedly go away on holiday and hence reduce your exposure or exit the market, and that one will engage the market during the so-called Christmas and New Year rallies from November to April when people are supposed to feel positive.

Many market commentators investigate this “Sell in May and Go Away” phenomenon by measuring the market performance in individual months and then average them, or use some other statistics, to determine whether this phenomenon is actually true of not.

My view is that this is best done by using an equity curve that emulates having managed a portfolio that bought and sold the index over a large sample of years to capture as many different market conditions as possible. Then compare this portfolio equity curve to that of ‘buying and holding’ the index and to doing the opposite, i.e. buying in May and selling in October of each year. 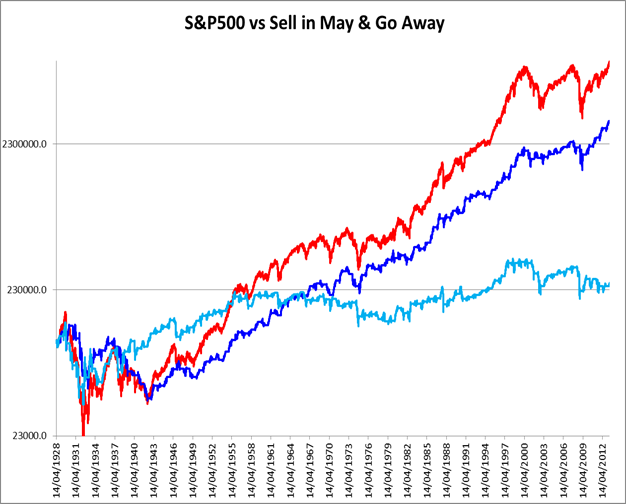 It is obvious from the above equity curves that over the entire period since 1928
“Sell in May and Go Away” performed better than “Buy in May and Make Hay”, however still did not match or outperform buying and holding the index.

The next chart analyses the period from April 1950 to current. 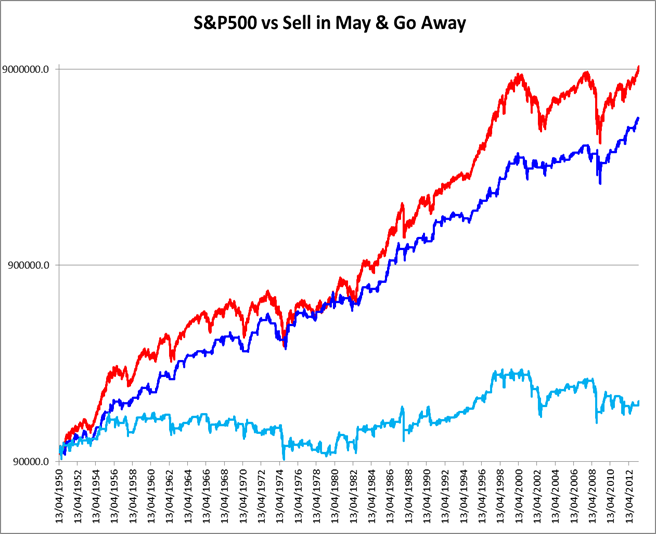 Again “Sell in May and Go Away” outperforms the buy in May timing and again does not outperform buying and holding the index.

The next chart zooms in to the period from April 1982 to current, a period of 31 years, with a similar outcome. 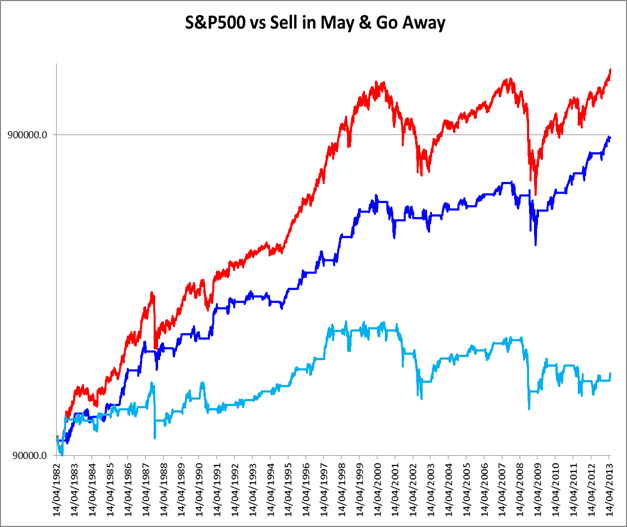 The statistics are even more convincing for this last period. The respective CAGR’s for the S&P500, “Sell in May and Go Away” and buy in May and not make hay were 8.96%, 7.25% and 1.57%. The shapes of the line graphs above show that the difference between the two timing strategies has become even more stark since 1997 and during the secular bear market since 2000.

From the above analysis it might be concluded that:

I decided to do a little more research to determine whether this post 1950 notion might carry any weight. Using data on the Dow Jones Industrial Average (DJIA) from May 1896 to April 1956 and using the same rules as used on the S&P500, the chart below resulted. 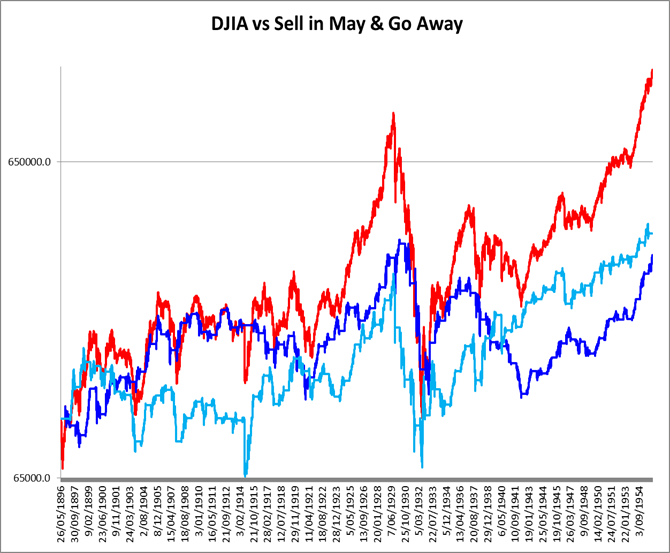 One of the problems with trying to form a view from such analysis is that the sample of 85 years (=trades) may be too small to be sufficiently statistically significant and on which to base an investment strategy going forward from here.

Even though the phenomenon seems to have accelerated over the 12 or so years, which has been a secular bear market, there is no reason why the market psyche with respect to this phenomenon couldn’t return to that of the 60 period prior to 1956. Indeed, the other period that “Buy in May and Make Hay” did very poorly was during the 1965 to 1982 secular bear market (see the first chart above).

My parting points are these:

Investors should use these points in devising their approaches to decision making in the market.