When will the Small Resources join the party?

The chart below is a Base Reference Comparison between 3 indices:

The base reference start date is the 3rd January, 2000 meaning that all three indices start at the same ‘value’ as the $XSR on this date and their relative performance is plotted since. Note the massive outperformance of the Small Resources Index despite the falls since early 2011. The ASX200 Materials Index ($XMJ, not shown) actually performed slightly better than the XSR over the 13 year period. Both have been in a two year down trend. The Australian bourse has a world-wide reputation for investing in its resource companies!

A bull market in Australia without resource companies joining the run doesn’t feel like a bull market. That may be a reason why this bull market doesn’t yet feel like one and maybe why so many investors remain unconvinced and are still watching from the sidelines.

The two year downtrend is not reason enough on its own for a sudden turnaround in resource stocks. Maybe it’s the high $A, maybe it’s any of dozens of reasons but, mark my words, if they do join the party there will be plenty of juicy opportunities that will catapult portfolios forward.

But before we look at the Small Resources sector joining the party, let’s first talk about whether the party will continue and what to do about it if it doesn’t.

As I have been saying for nearly four months now, this is a market that you cannot afford not to be in, to some degree or another. My journal posting two weeks ago about the potential end of the secular bear market may have motivated readers to ‘wait and see.’ Sure, as I said then, one of the traits of a secular bear market is that it battles to consummate new all-time highs. The DJIA is the only index to have made a new all-time high so far. The S&P500 isn’t quite there and nor is the DAX but both are very close.

However, another trait of markets is that they continue to surprise and seldom follow consensus opinion (no matter how many tweets or facebook opinions are posted!!)

The point is that nobody knows. So what action to take?

If the market continues higher, because it just might, then those that have been set with their processes for months will continue to prosper.

Now I don’t know for certain when, or even if, the Small Resources Index and its constituents will join the party. “Frankly my dear, I don’t give a damn.” But I do know that if the small resource companies do join in I will not need to change a single thing in my investing process and these companies will automatically and dynamically find their way into my portfolio.

There will be some clues soon after the resource stocks do start running, the biggest clue being the relative strength charts of the small ($XSR) and mid-cap resource ($XMR) stock indices against the All Ords. To give you a trained eye take a look at these three charts.

The first is the ASX20 or the 20 Leaders, as it used to be called, by market capitalisation. Whenever the blue line in the bottom RSC chart is rising the $XTL is outperforming the $XAO (All Ords) and whenever the RSC chart is falling the $XTL is underperforming the $XAO. Note how the RSC chart rose during 2008 while the $XTL plummeted. This is because it is a relative strength chart and tells us that the ASX20 fell but by less than the All Ords, hence its name, relative strength. 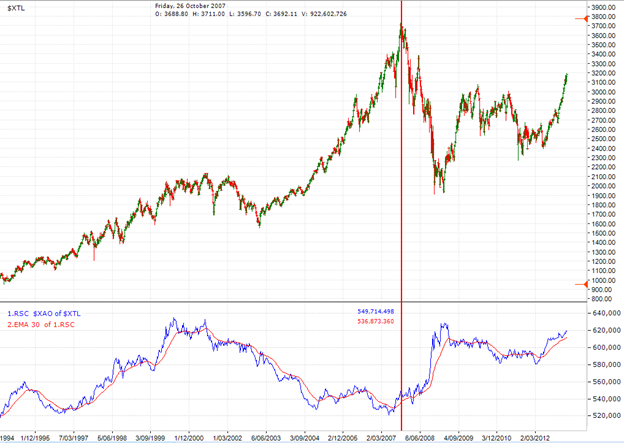 Of late, since the April 2012, the ASX20 has been outperforming the All Ords denoted by the rising blue line at the end of the bottom RSC graph.

Next let’s look at the Materials Index. The red vertical Value Line is positioned on the same date as the previous chart, 26th October 2007. 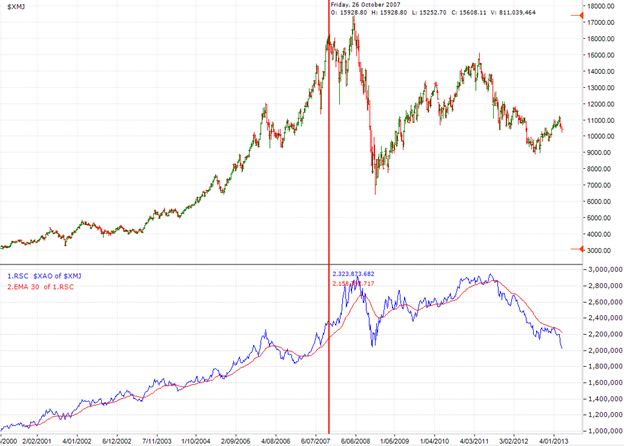 Note how the Materials Sector, which contains constituents that are also in the ASX20, has underperformed the All Ords since August 2011. Note too of late over the last few months how the RSC line has continued to fall even though the $XMJ has risen. Remember this is relative performance, not just performance.

The last chart is the $XSR, the Small Resources. This chart has the All Ords overlaid on the upper graph with a base reference date on 3rd March 1995. The RSC out and underperformance on the bottom graph should be obvious now that you have a trained eye. 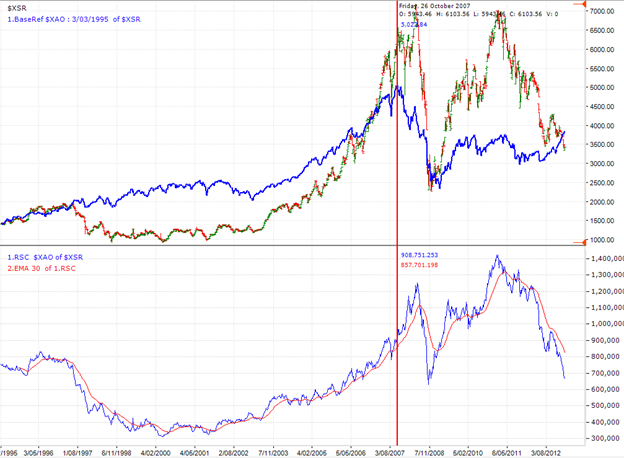 What we are looking for is the $XSR RSC line to start rising. When it does then we’ll know that small resource stocks have started running and joined the party. In my view, if this secular bear does indeed turn into a secular bull and the small resources stocks join the party then hold on to your hats because it could be one helluva run.

We have some resistance zones to get through before all this can happen but if we do, the odds are that it will all happen very quickly so best to get ready and prepare yourself with the necessary processes and decision support systems to take full advantage of these impending opportunities.