Worley Parsons back from exhaustion?

Worley Parsons (WOR) is a $4.5 billion market capitalised constituent of the ASX50 Index whose share price has been in a down trend for over three years. There are a number of technical patterns and events that have occurred over the last seven to eight months that are signalling a high probability set up for Worley Parsons’s (WOR) share price to rise from lows not visited since February 2009 and before that February 2006.

WOR has suffered some poor news to do with profit downgrades over the last year or so and has also suffered negative sentiment at the hands of the so-called “end of resources boom” in Australia. However, more than 75% of Worley Parson’s revenue is generated off-shore from Australia with revenues having grown by more than 10 fold over the last 10 years.

The first technical pattern to highlight is the completion of the fourth consecutive quarterly swing low. The swing highs and lows are shown on the daily chart below by the bold blue swing lines joining the peaks and troughs, also known as zig zags.

A new swing low is completed when a new quarterly high is reached. By quarterly I mean 63 day, 13 week or 3 month. This means that the share price needs to rise to a new 63 day, 13 week and/or 3 month high close, on a daily, weekly and/or monthly chart, respectively, to confirm that the low, which was reached on 27th March, was indeed the quarterly swing low and that the price wasn’t going to fall further before another peak is completed.

The new quarterly high close is a set-up signal in its own right. However, such a signal typically requires other confirming technical patterns. 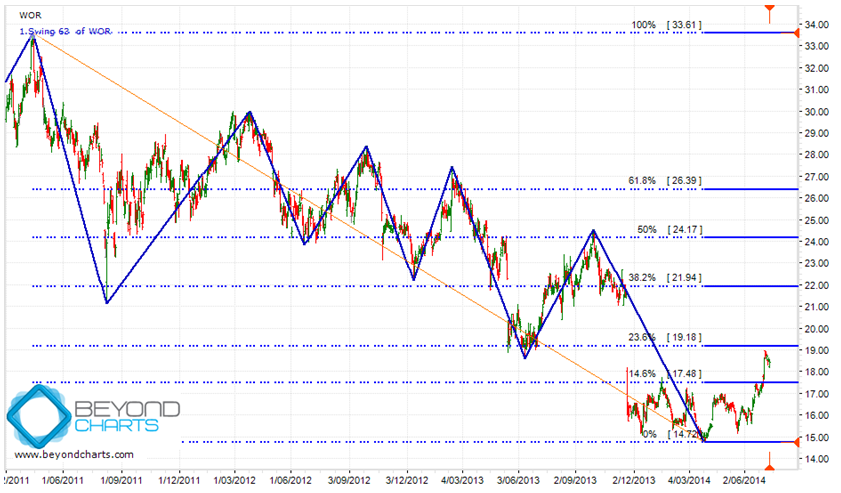 The second technical pattern to highlight is the basing pattern that has evolved since December last year which can be seen at bottom right of the above chart between the two lowest horizontal lines. The basing pattern is essentially a range where the peaks and troughs form at roughly the same respective levels forming a rectangle shape.

Thirdly, a breakout has occurred to the upside out of the basing pattern. This is a prominent technical event where previous selling resistance can no longer withstand buying pressure. Buyers collectively overcome the fear that another peak will form and that the price will head lower again to a level where previous troughs have formed. This breakout event signals the potential change from down to up trend.

Fourthly, the basing pattern peaks formed a resistance level that coincided relatively close to a Fibonacci 14.6% retracement level, which is also the level above which the price breakout occurred.

A last pattern to discuss is the gap that formed in November 2013 when WOR’s price dropped from the $21.50 level down to around the $16 level without any trades in-between. There are three types of gap: breakaway, runaway and exhaustion. Which gap type any particular gap actually is typically requires further price action to develop to confirm the gap type. The view that I have formed from the combined analysis above is that this gap is an exhaustion gap, meaning that the price fall from above $33 in June 2011 to current has potentially been exhausted meaning, in turn, that selling pressure has been exhausted and hence there is a high probability that prices will rise from these relatively low levels.

Technicians now look for the gap to be filled. This process has started over the last two to three weeks with WOR’s price breaking above the mid $17 level and now continuing to rise into the gap between $17.50 and $21.

Why might this swing low actually be a significant low?

The six month basing pattern is the clincher in the above chart as to why I believe that this bottom may be different to the other bottoms that have occurred as WOR’s price has continued to fall to new lows. Previous quarterly swing troughs were sharp V-bottoms whereas this low has formed in the midst of a sideways moving strength building basing pattern. Combine this with the other analysis above and my view is that there is a high probability for a decent price rise out of the basing pattern.

Furthermore, one of Share Wealth Systems investing methods, Intelledgence, a longer term near passive investment system that looks for exhaustion situations, provided an entry signal for WOR during June at $17.47.

The first target of around $19.00 to $19.20, the 23.6% Fibonacci retracement level, has already been reached, even though it fell a few cents short. The WOR price is currently in a short term retracement and may retrace further to around the $17.50 area. Or it may have completed this short term dip and rise directly from its 11th July close of $18.44.

In the medium to longer term over the next few months, should the change in trend from down to up continue, then WOR should head towards the $24.00 to $24.20 zone. This would complete a 50% retracement of the June 2011 to June 2014 fall and would reach the previous swing peak both of which should make this area a serious resistance zone.

Along the way WOR’s rise should stall when it finds some resistance after filling the exhaustion gap and reaching the 38.2% Fibonacci retracement level. This zone should be $21.00 to $21.95.

However, where there is upside there is also the potential for downside which must always be protected. If the above scenarios do not eventuate, for whatever reason, and price falls then a protective stop should be placed marginally below $16.80.