With plenty of ‘guessing’ happening amongst the financial world’s commentariats on where the US equities markets may be headed, we will join the banter with a yet another view. I use the word ‘guessing’ to laager those that predict market directions.

As such I preface this article by stating that the analysis below is not a prediction but a view based on the probabilities of technical patterns and how markets move. I believe that predicting market direction is dangerous as it potentially closes an investor’s mind to, or weights it against, the opposite of the prediction. It is important that an investor operates from a mindset of “anything can happen”.

Secular bull market in US equities continues to advance

The ‘guessing’ game has stepped up of recent weeks because the S&P500 and Dow Jones Industrial Index (DJIA) have recently achieved all-time highs, again.

In Q4 2012 and February 2013 I raised the subject on Peter Switzer’s TV show that a breakout of the range shown between the upper and lower red horizontal lines in the monthly chart below would potentially end the secular bear market in US equities and begin a new secular US equities bull market. That breakout occurred in April 2013 when the S&P500 closed above 1576.09 for the first time ever. Bar a few days it has traded above that level for over a year now.

That breakout signaled the change from secular bear to secular bull market in US equities. Despite this the majority of private investors are still not convinced of the equities bull market in the United States. 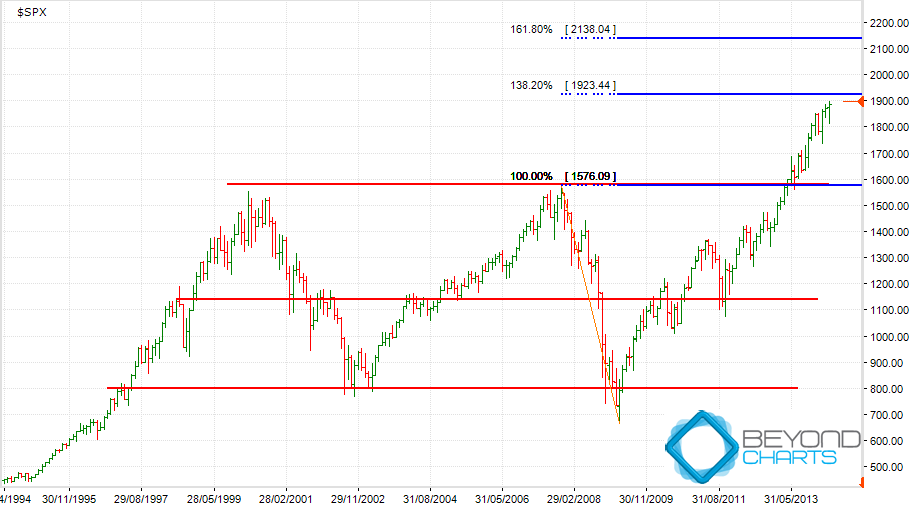 Over the last year the S&P500 has moved towards its first major target, the 1920 – 1925 zone, shown by the lower blue horizontal line on the chart above being the 138.2% Fibonacci Projection. It hasn’t quite reached that zone yet and it may not in this particular run-up.

But before then there are some shorter term technical issues that need to be resolved.

What may happen at this level?

To analyse what may happen around the 1900 level on the S&P500 we need to step down to a weekly chart which is shown below. The monthly chart above spans 20 years from 1994 to current whereas the weekly chart below covers the last 7 years from 2007 starting with the 55% decline in the 2008 bear market.

Firstly, 1900 is a big round number and big round numbers often have an effect on shorter term investors who tend to lose some confidence waiting to see what others may do, especially when the big round number is reached after a sustained run-up. The S&P500 has moved sideways for 2 months now since it reached 1880 at the end of the 1st week in March – it is still at this level now 9 weeks later which indicates indecision.

Secondly, the retracements since mid-November 2012 have been shallow relative to typical retracements on equities markets. At some stage the S&P500 does need to have a deeper retracement, a breather, to catch its breath whilst on its bull run.

The 1920 – 1925 zone, or the 138.2% Fibonacci Projection, could be a high probability area for such a retracement to occur but, technical analysis not being a science, the S&P500 doesn’t have to exactly reach that zone; it may have already got close enough. 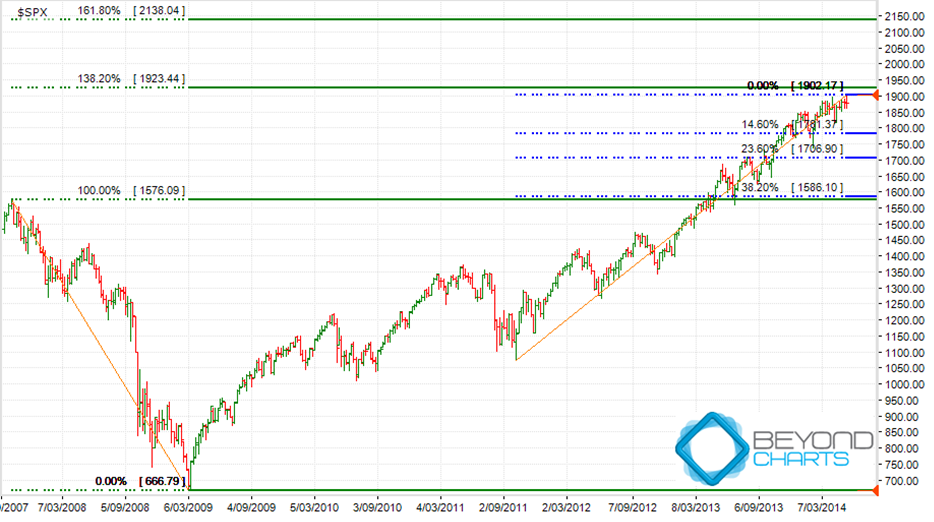 Such a retracement would ruffle the feathers of most investors, especially those that do not have a good big picture perspective of how equities markets move. However, in my view, such a retracement would be healthy for the equities secular bull market provided it doesn’t go much deeper than the 1690 level. It is important that any retracement remains above the previous high of the secular bear market, that is, 1576.

Another possibility from the current level is that a shallower retracement occurs, to the 1815 – 1825 zone, before the S&P500 continues on its secular bull market run. This will merely delay the inevitable deeper retracement.

Lastly, there is still the bullish scenario which would see the S&P500 soldier on directly from these levels without any retracement at all, the current sideways move being a sufficient breather. If it did this would be a very bullish indication showing how strong this bull market actually is. However, such a move would still carry the probability of a deeper, and maybe a steeper, retracement occurring at any time in the future.

This is why I favour a retracement from these levels, or around the 1920 – 1925 zone. It would make for a healthier secular bull market and lower the probability of highly volatile retracements down the track.